Harashima is a young woman with short black hair that covers her right eye and gray eyes. She is seen wearing a blue business suit, a darkish-red tie and low-heeled shoes.

As Nonko's editor, Rui is diligent and mindful where she constantly tries to remind Nonko of the manga deadline, preventing her from drinking, or behaving unprofessionally. Her life in the city and work at the office makes her stressful, so she enjoys the hot springs in the Yuragi Inn.

She can be emotional such as when she's drunk.

Before meeting Nonko, Rui read her manga and became of a fan that she even saved her one shots.

When Rui was newcomer editor, she eventually was assigned to be Nonko's editor. Nonko suggested they drink to commemorate the event, but Rui eventually became too drunk to handle the celebration. While believing she messed up on their first day, Nonko apologized to Rui that the former got too excited. Rui would then continue to be beside Nonko as her Mangaka editor.

Rui is a normal human with no special abilities. As an editor, she is quite professional in the mangaka business.

Nonko is the mangaka Rui works with. Before they met, she was a fan of Nonko's work and was originally nervous around her but they eventually grew close because of the Nonko's kind personality. She is often minding Nonko to not drink alcohol and to finish her work. Although she has her hands full because of Nonko, she likes being her editor and is sadden at the thought of being removed from the position. She even one time wondered if she was being a burden to her. Because of Nonko's love for alcohol, they often go out drinking together. 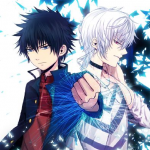